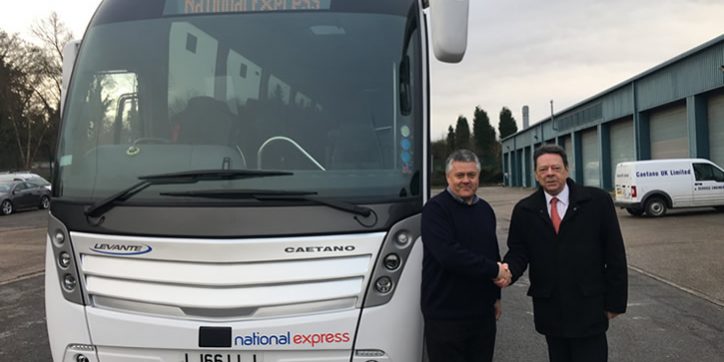 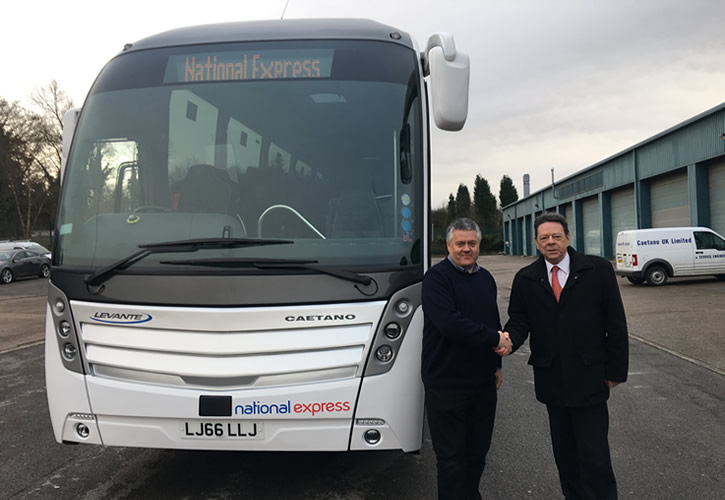 Llew Jones International, are proud to announce the addition of one of two brand new Caetano Levante 2 (National Express-liveried) coaches, in response to the awarding of a major contract with National Express comprising of the 385, 544 and 090 services; two vehicles running daily spanning between Bangor in North Wales, and Southend-on-Sea, via London Victoria.

As you may already know, Llew Jones have been working with National Express for many years, but in February 2012 became the official provider of the 385 service, a cross-country daily service running between Bangor and Manchester. In 2016, this service was extended to London Victoria and Southend-on-Sea, and would require two vehicles running in opposite directions. The 385 service running from Bangor, North Wales to Manchester, the 544 from Manchester to London Victoria and the 090 from London to Southend-on-Sea. The company has responded to this by investing in two brand new Caetano Levante vehicles.

The company would like to extend a big thank you to National Express, Caetano, all of the staff at the company main depo in Llanrwst, and of course to all passengers who have used the 385, 544 and 090 services since its launch in 2016, for helping towards this huge step forward.

This website uses cookies to improve your experience while you navigate through the website. Out of these, the cookies that are categorized as necessary are stored on your browser as they are essential for the working of basic functionalities of the website. We also use third-party cookies that help us analyze and understand how you use this website. These cookies will be stored in your browser only with your consent. You also have the option to opt-out of these cookies. But opting out of some of these cookies may affect your browsing experience.
Necessary Always Enabled
Necessary cookies are absolutely essential for the website to function properly. This category only includes cookies that ensures basic functionalities and security features of the website. These cookies do not store any personal information.
Non-necessary
Any cookies that may not be particularly necessary for the website to function and is used specifically to collect user personal data via analytics, ads, other embedded contents are termed as non-necessary cookies. It is mandatory to procure user consent prior to running these cookies on your website.
SAVE & ACCEPT